The Mother and Daughter team of Trudy and Helena Pollard gave a moving account of their work in Cambodia. What started out with simply showing them how to use sewing machines which were donated to the orphanage, became an ongoing effort to to keep families together and children out of the orphanage. Through resurrecting old cultural textile knowledge, that had been all but been destroyed by the PolPot regime, they are able to support the outlet for their work called “Silk Studio”. By selling and promoting their hand made silk fabrics and wares, they are helping to allow families to stay together as well as creating “new families”. A worthy pursuit in a country that is still suffering the effects of the Pol Pot regime.

They had some beautiful handmade silks on sale that have been produced by the Silk Studio in Cambodia. 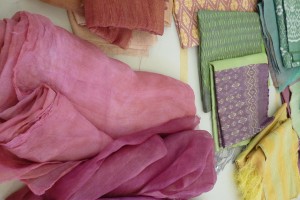 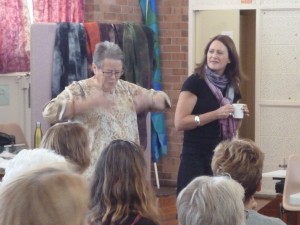 Richard Woldendorp’s new book “Out of the blue” was ready to be picked up by those that had ordered one.

Linda Riccio has donated a book by Narla Searles to our library.

Lindy has won the Melville Art Award for the Textile section. Well done Lindy! Her entry was a hand felted nuno dress using 6m of silk fabric with hand stitching. It is reversible with feather stitching around the hip and armholes and was dyed with natural dyes.

We have a beginners class next month if anyone knows someone that’s interested. 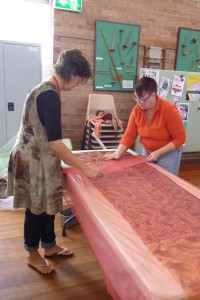 Virginia asked, on behalf of the committee, if there was anyone who would like to do the reporting of the Toss and Tell on an ongoing basis as their contribution to FeltWest. Feltwest is also looking for someone who would be willing to do the buying of the tea, coffee and biscuits.

The Craft Fair is coming up and any pieces being offered for display must be handed in today.

Virginia asked for expressions of interest in Marjolene Darlinga’s workshop as it will fall just before, during or after Easter next year. We need a commitment of approximately 10 people before negotiating details with her. There appeared to be enough interest so this will be followed up.

On to the TnT itself:

Soosie showed us some examples of her work for her exhibition at Blinco Cafe in Fremantle. The subject is reef creatures and she showed us two beautiful fish that will be part of her exhibit. She also showed us a wall hanging she had made a while ago of the Bungle Bungle’s with an Ariel view of Kununurra on the reverse side. 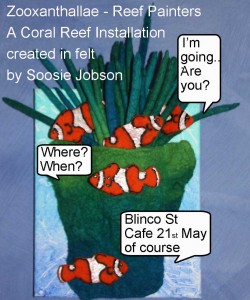 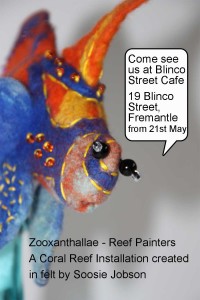 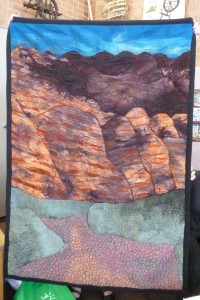 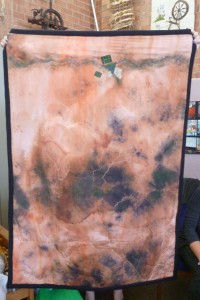 Judith Shaw showed us an interesting sample she had done using just scraps of colour laid down without any planning. Maybe a good use for all those leftover bits! She also showed us a necklace of beads she had made from the seeds of the Tuart tree. She has plenty if anyone would like some. 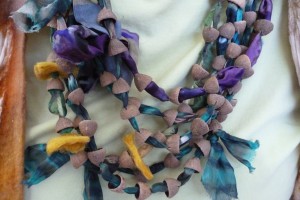 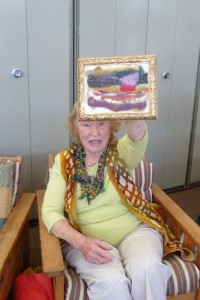 Antoinette showed us her lovely piece of knitted merino wool that she had dyed at Lindy’s dying workshop. She plans to make it into a dress. Interestingly it is different on both sides.

Vera has created some needle felted landscapes. One was of her dreams of a relaxing holiday which involves the sky and sea. She has been playing with colour for this piece. Her second piece shows a longing for her homeland of Russia. Depicting a winter scene of snow, a bird on a branch with red berries. Both beautifully done. 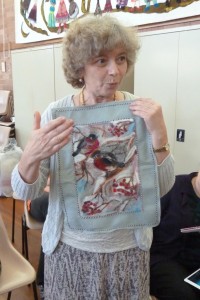 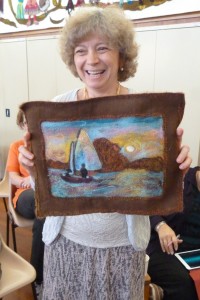 Juliette presented her “labour of love” for the past month. An exquisite white baby blanket with a story behind it. Juliette’s niece married last November and diagnosed with Non-Hodgkinsons Lymphoma. She had treatment and then found out she was pregnant. 2weeks ago the baby was born and this blanket is for this new bundle of joy. The blanket has tissue silk on the back with merino wool on the front and is inlaid with lace that had been made by Juliette on her computerized machine. It is edged with satin blanket ribbon. She also made a beautiful pair of white booties. 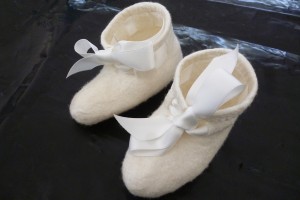 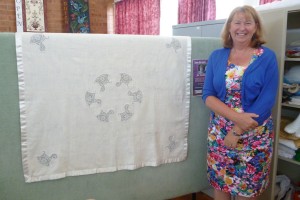 Donna talked about her upcoming workshop on sculptural felt. She brought some examples of her work and will be exploring ways to apply these sculptural techniques using prefelts. If you are doing the workshop let her know if you would like it to go in a certain direction as she is flexible and if someone wants to explore a specific side of sculptural felt she will try to take it on board. 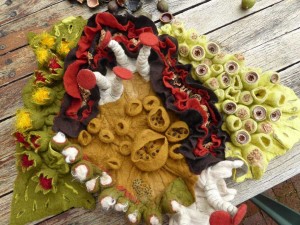 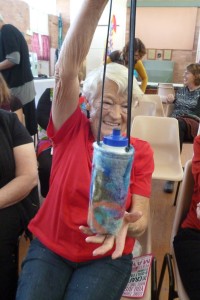 Judy Hebiton showed us her unique water bottle carry cover she had made.

Nancy has just finished the piece she had started at the last retreat. It started life as a top but during the process has morphed into a skirt and finally, after some cutting and sewing became a dress!

She also showed us her collar come scarf. The group has instantly renamed it as a “Scollar”! It uses some hankies, a little wool in the middle and some fabric scraps.

It has some stitching embellishment and is reversable. 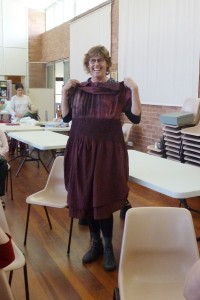 Jude Newman did the dying workshop but will bring her samples for the next Toss and Tell.  Shana created a vessel in blue around cardboard but she is still working on it so it will be different when next seen.

Vianne showed us the Palm pod cover that she has inlaid with strips of wool and will use as a fruit bowl. It is an interesting application for wool. She has used this technique on many surfaces in her home. It was pointed out that the orange seeds of the Cocos Palm when fermented make a beautiful brandy orange colour. Vianne also made a flower that started out as something else but after working on it further she now sees it as a rose and as a tribute to her late Mother. 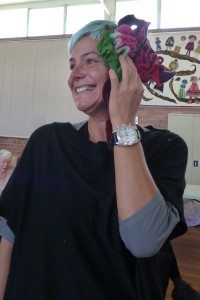 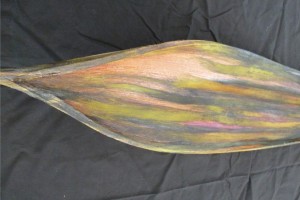 The raffle was won by Tracey Thompson.