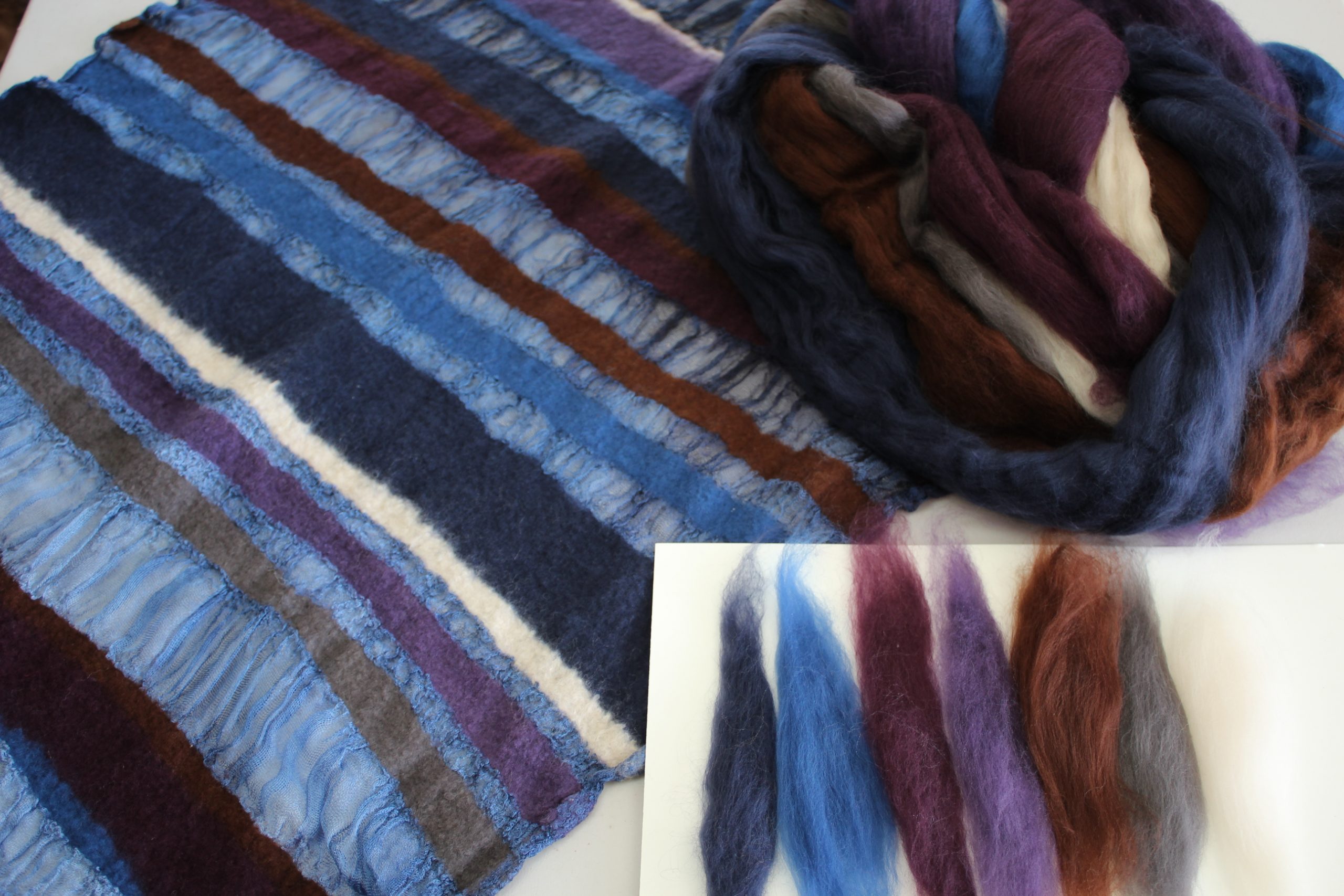 Demonstration:
Our demo this month emphasised the importance of fulling felt completely. Nancy Ballesteros illustrated a variety of surfaces one can use for final fulling. Optimum shrinkage was illustrated with samples comparing partial and fully fulled felt in different weights, as well as related experiments with nuno felt.  Hairiness can be avoided by not allowing the felt to dry out during the fulling process. Re-fulling after allowing the felt to rest and relax, is beneficial.

Sue Eslick explained how different wool breeds when laid out in the same size, using the same weight of wool, all reduced to the same size eventually. Some quicker than others. She then demonstrated some more extreme ways of fulling, especially suited to more bulky pieces where the inner layers may still be soft and require more fulling. These included very hot water with lots of vigorous hand rolling and stretching, hot vinegar solution soak, wrapping and rolling in a cloth, rubbing with wrapped stones and her pièce de résistance – the hammer!

Members again illustrated the group’s diverse interests with their Toss and Tell items: 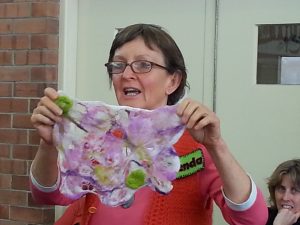 Kerry Bertucci had made a pair of beautifully fitted gloves with guidance from another member, Jill Jodrell. With a current focus on small vessels / pods, Kerry had also created a unique shaped vessel by stitching prefelts over a form. 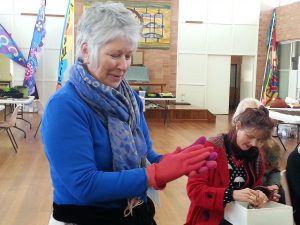 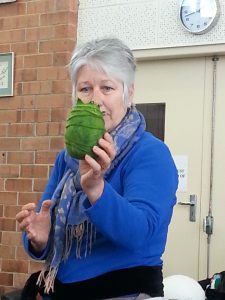 Sue Eslick had crafted another beautiful bag with the intention (and challenge) of attaching leather handles. She had also made a dainty small box-shaped purse.

Katrina Virgona is still in fetish mode and we were able to handle the components of what may become ‘hairy handcuffs’   comprising  hair,  jute and flax fibres– possibly to be used on members guilty of incomplete fulling. She said she uses a sort of dry felting technique on  hair to matt it in to a net which she then overlays on the wire armatures she makes, and that she also felts a lot with a mixture of wool and hair.

Judith Shaw made use of some donated Alpaca to produce a hat. With a brushed and rustic appearance, she said it was light and warm to wear.  Made many years ago, she also brought along a mask constructed by moulding over a form. Despite it having been used as outdoor décor all this time, there was virtually no sign of deterioration. 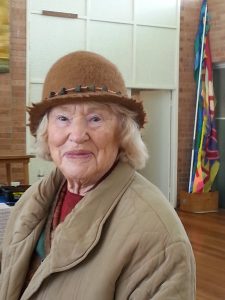 Marie Jacquier had a work in progress from Nancy’s ‘Shifting Shapes’ workshop and was now inspired and excited about the concept of realistically being able to make and wear felted pieces using the technique. 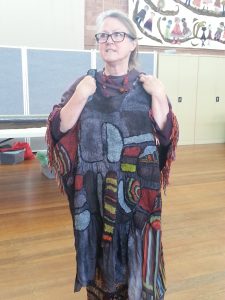 Sara Quail had been to a hat and vessel workshop with Dawn Edwards (USA) at the Geelong Fibre Forum The vessel used a ‘cracked mud’ resist technique and intense fulling. She modelled 3 of the 5 hats made, one of which featured beaded silk.  She also showed how the recycled aluminium from drink cans can be annealed, stitched and embossed, sometimes incorporating felt. 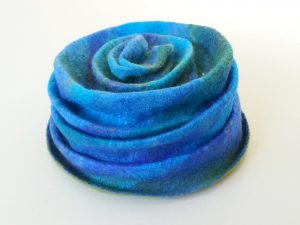 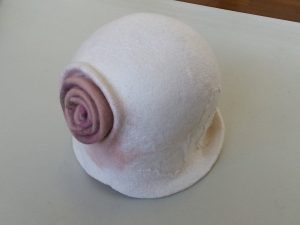 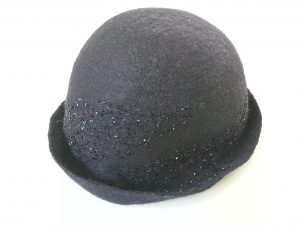 Nancy Ballesteros is experimenting with techniques to create striped fabric. Her design concept is influenced by Fibonacci principles. Her samples utilize silk mesh with a little hand stitching to complete the look.  As the layout of wool fibre is only in one direction it is even more important to be aware of directional shrinkage. Other wool only samples illustrated a very subtle plaid look achieved by laying stripes of fibre on one layer, and then in the opposite direction for the 2nd layer.  Watch this space for more stripes in coming months ……. 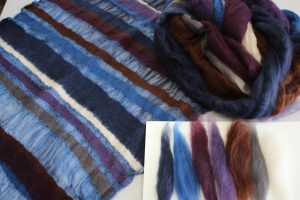