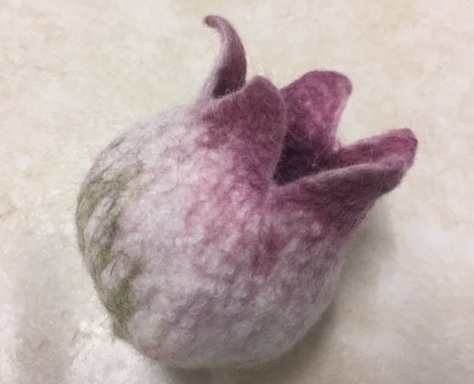 “Fantasy flowers by Sara Quail was the theme for our mini – workshop at the March meeting. With around 40 members in attendance, she demonstrated how to create a variety of flower shapes using a small round resist and directional fulling techniques.  Sara showed us ways to layout the wool and how to add colour to the inside, the surface of the flower and the calyx. Once felted to a firm prefelt, the resist is removed and basic shaping is achieved by fulling in the direction that shrinkage is required. Limited only by one’s imagination, the petals can then be further manipulated to change their shape, direction and position.

After creating enthusiastically for barely an hour, members had produced an enormous variety of flowers. Sara then showed us how to attach these to a twig as well as other creative variations using the same basic technique. After a lunch-break and meeting notices, the hall continued to bloom well into the afternoon! “

Sara showed a number of pieces that she had made at Katia ‘s workshop. One of these had the fibres laid in such a way that the felt sample could stretch. 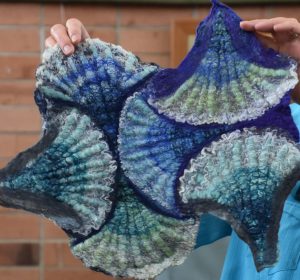 Another was the trademark scallop shells that Katia showed at the Artist talk.

Judith showed a wrap that she had made at Katia’s workshop .Unlike Sara’s pieces, it had fabric visible on the ends, which gave a very different effect, in spite of using some very similar techniques.

Liz showed a number of glasses cases that she had started at the “Beginners’ Extension” workshop run by Kerry Bertucci with Jean McKenzie assisting at Tuesday afternoon felting. It was interesting to see the different results in these items depending on how much wool was laid down, and the direction in which it was laid. This made it a really good idea for the workshop.  Liz did another one where she added cotton lawn to the wool for a really different look.

Carol showed us a pair of ‘croc socks’ or slippers that she had made after being inspired by attending workshops at Feltwest. She had also made some cacti and some monsters, and has been making monsters with her class of primary school students. Perhaps these children are our future members at Feltwest?

Susan modeled a scarf she made at home, after being inspired by a Feltwest workshop. These workshops seem to be inspiring lots of our members.

Stacey has been really busy doing some online workshops, and has produced two very light and fluid waistcoats that used silk and bamboo fibre as well as wool.

Stacey has also produced a collar style scarf that will have a button or similar as a closure when it is completed.

Katrina informed us about her upcoming exhibition and workshop at Ellenbrook. Please see Billboard for more information soon.

Sue showed us her felted cord necklace and explained that she used chain inside to help weight it down. Sometimes these necklaces are too light, and don’t sit well against the body. Sue cautioned that you can’t put the chain inside at the beginning of the felting process, it needs to be done towards the end to work successfully.

We all had a thoroughly enjoyable day, make sure you join us next time, 21 April 2018 Saturday.  We will be learning about the how’s and why’s of laying wool differently, in this mini workshop by Nancy Ballesteros.

Feltwest have also asked Nancy to also provide a popup shop with wool and silk to purchase.