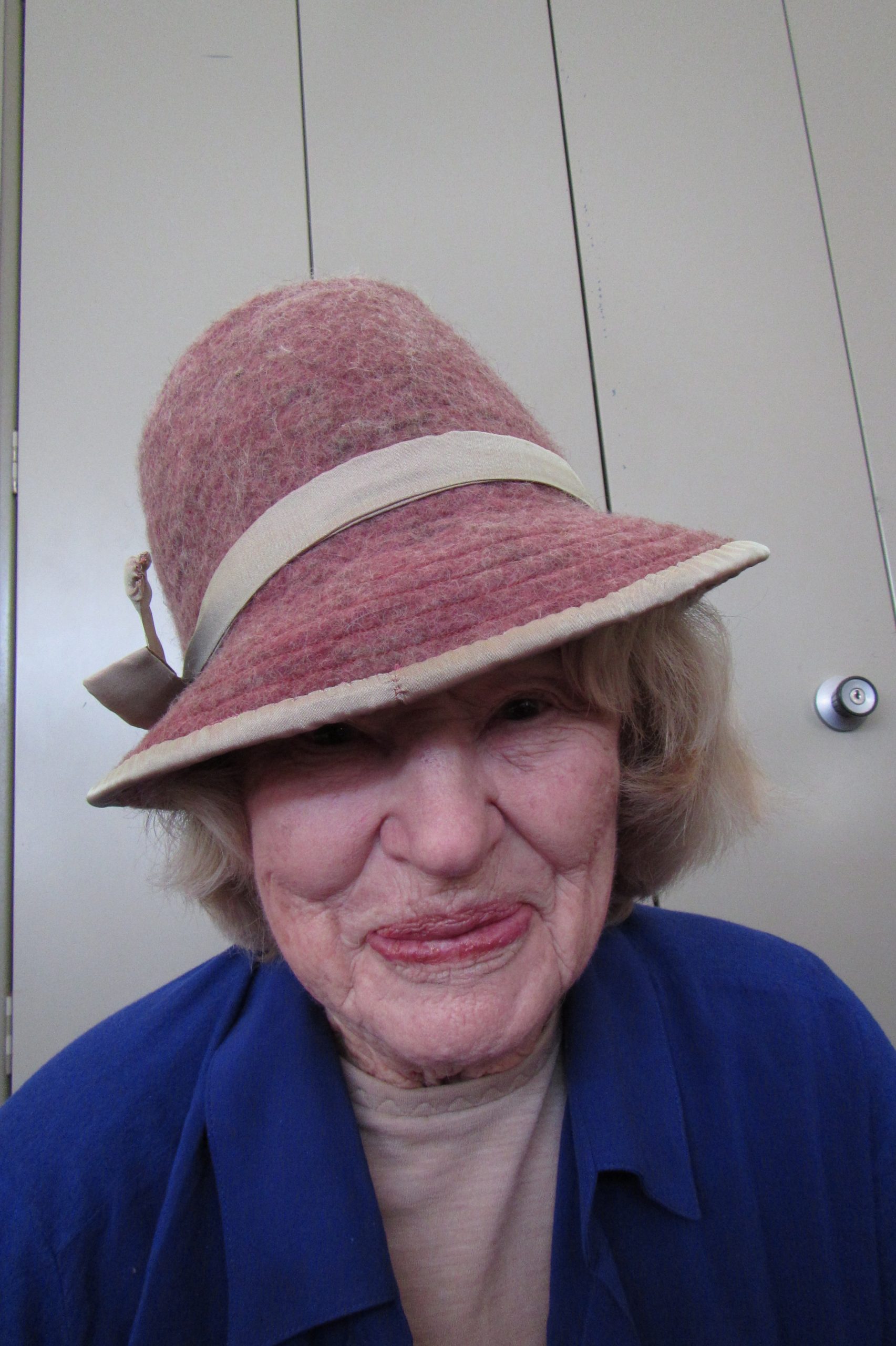 ORIGINS OF FELTWEST by Judith Shaw. Our story belongs with the contemporary practice of hand felting in New Zealand and Australia before formal Feltmaking associations were formed.

By the time feltmaking took hold in Australia, Mary Burkett in England and Beth Bede in the USA were researching traditional feltmaking around the world ,experimenting with complex techniques and encouraging others to share the excitement. Beverly Gordon’s book, Traditions, Techniques, and Contemporary Explorations FELTMAKING, 1980 N.Y gives comprehensive information about the craft and the feltmakers in the USA at that time. Although materials and equipment have made the work easier it might surprise new feltmakers to discover the level of expertise achieved before 1980.

In a letter to the Felt West editor in 1996 Marion Valentine in New Zealand refers to the increasing interest and expansion of feltmaking since 1990. Val Gilmour of Bunbury, now an Hon.Life Member of Felt West, travelled back and forward to New Zealand and saw what was happening there, influencing the creation of the first WA felting group in Bunbury. Earlier still, Peggy Buckingham co-ordinated TAFTA’s only WA Convention at Muresk Agricultural College near Northam in 1978.

Two feltmaking enthusiasts from Queensland’s Toowoomba Spinners and Weavers calling themselves the “ Gundawindi Greys”, demonstrated hand feltmaking taught to them by “a migrant lady”. Their technique was passed on by participant Ellie Eaton (Royal Agricultural Society & Melanian Society) and others, when they met with woolcraft practitioners. Ellie recalls that the felt was very thick, which was usual in countries with colder winter climates. All of this occurred in the midst of the hand spinning craze which resulted in an increased use of natural fleece and increased understanding of the properties of different types of wool for knitting and weaving.

So, felt making began as demonstrations showed the way for a further and exciting use of wool already on hand. At this time wool crafters washed and carded raw fleece. Demonstrations often included advice on washing wool. Some country people had their own sheep, others bought from emerging seller breeders or from Elder Smith’s wool stores where fleeces for hand spinners were put to one side and sold by a helpful character in the back of the shed! Wool was also imported from NZ.

West Australians who went to NZ for the National Woolcrafts Festival, Manawatu, in 1990 saw prepared, dyed wool on sale for the first time. New Zealand had many wool processing outlets and feltmakers there could choose the type of wool batt they wanted for specific felt works or purchase sheets of machine made natural wool felt. Wool batts were even available in broadloom widths which allowed for commercially viable production of felt coats etc. In a demonstration, well made felt sufficient for a large car coat was made from a large wool batt in around 20 minutes using a cane blind, soapy water and woman power.

During the Woolcrafts Festival a group of leading N.Z feltmakers posted a notice inviting anyone interested in becoming part of a Southern Hemisphere Feltmakers register to come to a meeting. Elaine Hutchinson and Judith Shaw attended that meeting of a group which went on to host two NZ Conventions followed by the Third Convention and first in Australia organised by Val Gilmour and Bunbury Feltmakers, at the Bunbury Cathedral Grammar School in 1994. It drew an incredible group of talented feltmakers nation wide plus representatives from NZ. Registrations from other States included Polly Stirling, Molly Littlejohn, Clare Carolan, Jan Clements, Christine Sloan, Jenni Farrel, Liz.Evans and others who went home to form felting associations and undertake teaching. Bunbury inspired the formation of groups in Canberra and Victoria and the recognition of felting by existing woolcraft organizations in other States.

Undaunted by the huge joint effort required for that first Australia wide Convention, Bunbury hosted a second live-in retreat for WA feltmakers which offered a programme of demonstrations and exhibition of work by all participants. All shared their experience on an honorary basis.

The first Felt West newsletter was issued to approx. 50 members in July 1996 after the three day retreat in Bunbury at which participants agreed to work towards a formally constituted felters’ network. It was agreed that this should now be based in the Perth Metro.area with Judith Shaw as co-ordinator. The first newsletter was paid for with funds carried over from the Bunbury retreat. Our stated aims were

i) to send out two or more Newsletters annually
ii) Plan a felters’retreat once or twice a year at a suitable live-in venue
The Bunbury Feltmakers with Val Gilmour at the helm and Hon.Treasurer Gloria Truman had done a marvellous job of providing for felters’ interests over the last few years and thanks from all concerned were gratefully recorded.
The first Newsletter invited all members to attend felting days at Craft House on Friday 15th November and Saturday 16th 1996 to give them an opportunity to meet and share. Arrangements were made to billet out of town members. Thus began Felting days & teaching sessions in Craft House, Menora. Seven current members have been part of Felt West from that beginning.

The early newsletters contain felting hints and ideas which remain relevant. Copies could be available at Craft House for reference on Felting days. When Felt West was formed (later to be incorporated) we had already began to take advantage of tutors with world wide experience. Lene Neilsen from Denmark was the first international tutor. Most of us had learned from each other and from demonstrations at Felt happenings. Lene went on to produce FELT FILT, available in English as well as Danish, setting high standards for hand felting and undoubtedly influencing many subsequent tutors.

E & O.E ( errors and omissions excepted!), many names deserve inclusion. In WA however, we cannot but remember the influence of Susan Seaman, Holly Nutley, Jenny House, Eileen Cresswell, Teresa Lawrence, Val Gilmour and others who set high standards and were inspirational by example and thus contributed individually and collectively to encourage feltmaking in WA. 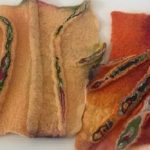 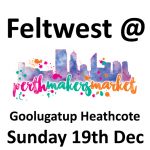