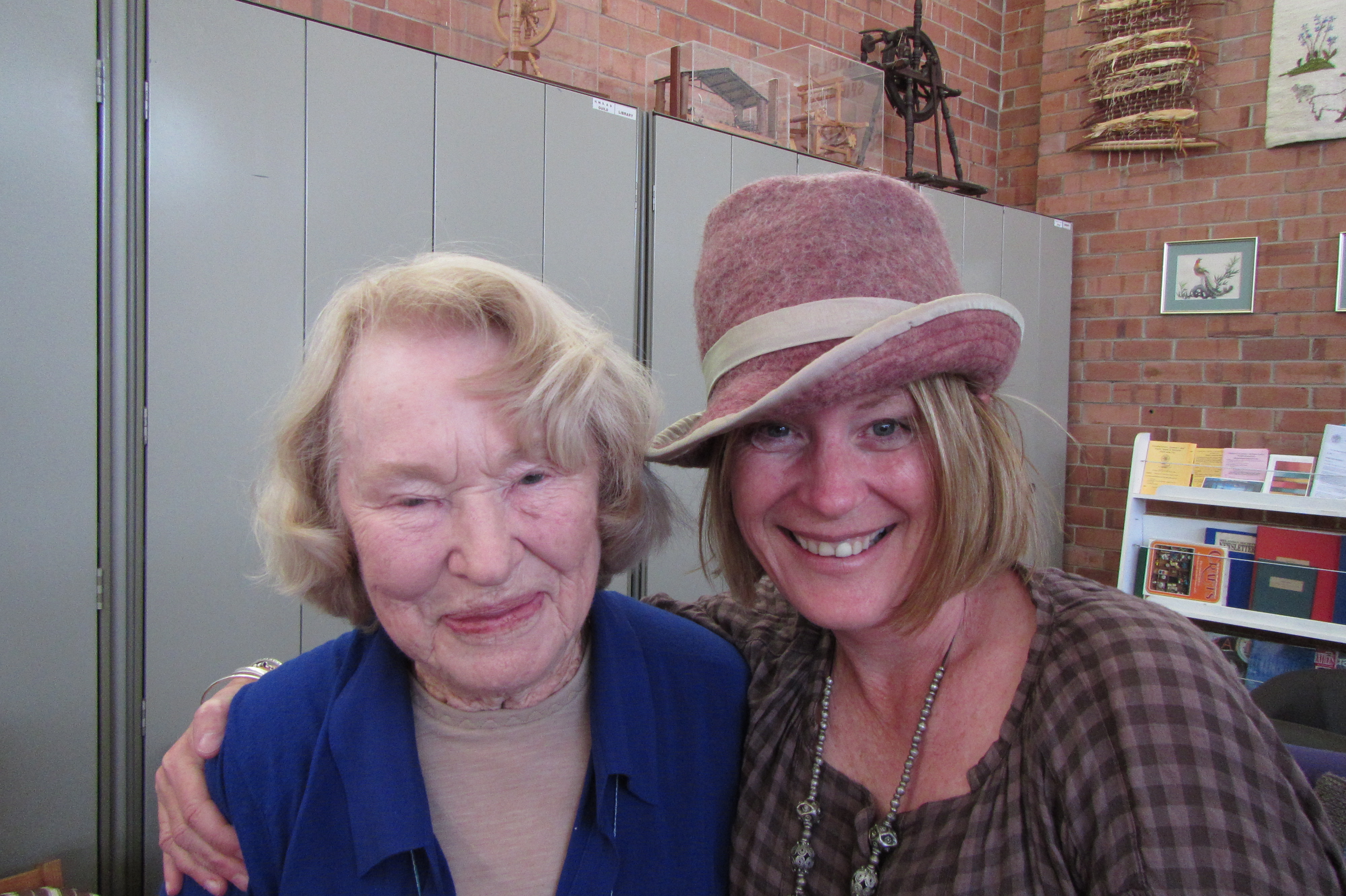 Hot on the heels of her recently published e-book ‘Structural and Sculptural: Complex 3D shapes in felt’,  Soosie showed us an array of her ‘Bloomin Flowers’ incorporating some of the same principles and techniques detailed in her book.
Using the shape of the lateral view of a flower head and stem, daisies were created using an all-in-one resist technique. The flower head consisted of multiple layers of wool, separated by thin plastic and robustly prefelted before the next layer was added. These layers were simultaneously felted onto the stem in a small area where the head meets the stem. The flower head section was cut open along the top when the resist starts to buckle, opened up, petals cut and fulling continued. A foam gap filler rod was used as the stem resist, which can be easily removed after fulling and replaced with a wooden dowel for strength.

Roses comprised several parts using robust prefelt made from 4 layers of wool in the desired colours.  A foam rod was again used as the stem resist. 4 templates in varying sizes were used to create the petals and sepals. 3 rows of petals and then the sepals were stitched to the stem with un-waxed strong natural thread. Each petal requires individual fulling with very soapy hands. Treatment of petal edges produces different results. Cut edges before fulling creates a firm sealed look to the petal, whereas cutting after fulling reveals the colour of the internal layers. Tumble dry to complete the fulling process.

Another variation involved a resist to create a ball shape for the centre of a flower. Once robustly prefelted, it could be cut open, stuffed and stitched onto a stem, with rows of stitched petals added as before. Stitching disappears once fulling is completed.

Soosie’s wrap and stitch method involved 2 elements – a foam rod stem and rectangular strips of prefelt. Covered in plastic except for a small portion on one long side, the prefelt is stitched spiral fashion around the stem. After fulling, plastic is removed and petals can be cut. Different effects can be achieved by varying the size of the rectangle and placement of stitching. Soosie emphasised throughout that prefelts need to be robust and hanging the flowers upside down was the best way to dry them.

And as if that didn’t blow our minds she showed us some experimental flowers under development – Daffodil, Cymbidium and Phalaenopsis orchids. Watch this space….. 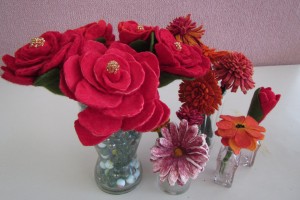 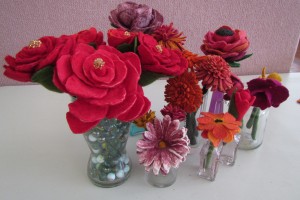 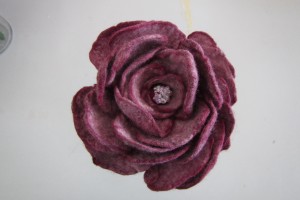 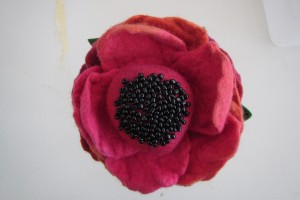 ·         Sue Harrington advised that Soosie’s Complex 3D forms October workshop has sold out. Soosie’s latest e-book on the same subject is now available for purchase with a free copy of ‘How to Felt’ to the first 50 purchasers.

·         Members are encouraged to submit ideas and suggestions for workshops and demos to Sue Harrington or Sue Eslick for consideration by the committee for the annual Planning Day 15 November. The aim of this day is to create a diverse and instructive year for the benefit of all members.

·         The upcoming Felting Frenzy 30 Nov – 1 Dec is the equivalent of a local retreat especially for those who didn’t attend the annual retreat in May. It is a great opportunity to spend all or part of the time to focus on special or large projects.

·         Wafta – To celebrate their 21 years of existence, Wafta is calling for applications for their twentyONE+ 2016 Juried Exhibition. Refer Wafta’s website for details. The Ilka White workshop has sold out.

·         A visit to the Feltmakers of the Great Southern at Torbay Hill Function Centre, 1 Shelley Beach Road, Western Australia during the Art & Craft Trail, 26 Sept – 11 Oct, 2015, is highly recommended if you are in the area.

·         Chez Armstrong of FIGS has advised there are a few spaces left in a Fiona Duthie workshop in Cranbrook 21/22 November. Contact: FIGS2015@yahoo.com.au

·         Pauline Franklyn workshops are now available – enquiries to twopauls@iinet.net.au
2.      Borrowing FeltWest items – a reminder that a maximum of 2 Feltwest items may be borrowed at any time, for a month only. Thereafter the items must be returned or renewal discussed. All items to be returned by November Toss n Tell.

3.      Craft House – the APCH committee has made an application to Lotterywest for block-out blinds for the hall and the studio, which should reduce summer heat and enable daytime slideshows and video presentation.

4.      Missing equipment is ongoing. Return of the FeltWest mannequin is still sought. The general storeroom is now locked. Items for general use can be used on the premises only. Items belonging to user groups and available to borrow must be borrowed officially via Susan Sheath, booking officer for APCH.

5.      Soosie gave us more ideas and inspiration about the theme for the MACRO/Micro exhibition expanding on how enormous things can be made small and vice versa. Keep updated via the website and Facebook posts for info and inspiration on a variety of topics. Members are invited to contribute ideas and inspiration. The Exhibition venue – Central TAFE is a great exhibition space. Now is the time to start mulling over ideas. Open to all members, there will be no entry fee.

6.      The 3 new ladies doing the beginners course were warmly welcomed.

·         Teresa O’Malley intrigued us with a small, wet felted ‘poodle wool sheep’ made for a friend who collects sheep ornaments. The body of the sheep was made from the hair of the friend’s poodle and the head incorporated the hair of a Hungarian water dog. 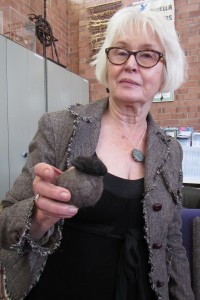 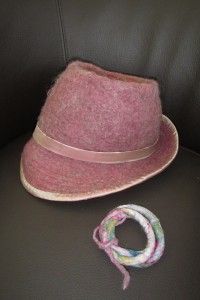 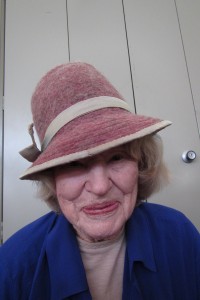 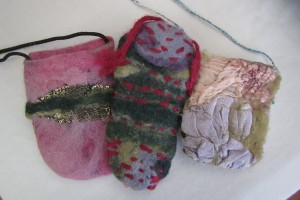 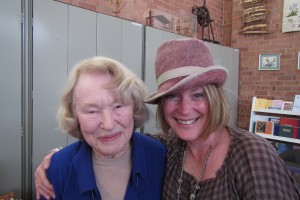 ·         Judith Shaw showed us some of her very tiny micro pouches no bigger than 7 x 4 cm. Very discreet, detailed and dainty. One of them had a flap, with one side suitable for day wear, the other for the evening. Her brown hat was one of 5 made some time ago. They were looking a little sad and floppy so she went about refreshing them by giving them a good wash in the bathroom sink with a little shampoo. Squeezed and dried off with a bathroom towel, she then re-blocked them, edged and titivated where necessary and voila – good as new!

·         Gudren Griffin produced 2 beautiful monochromatic necklaces created from Nancy’s meditation beads workshop, in pink and red. Determining their length was governed by the number of beads her new cat had appropriated for her own use. The Jacaranda shawl she had made using a silk lap had shrunk more than she expected, but she achieved beautiful detailing each end of the shawl by using silk hankies in subtle shades. 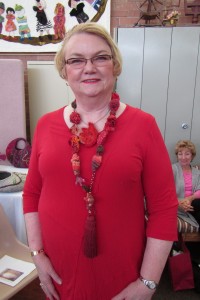 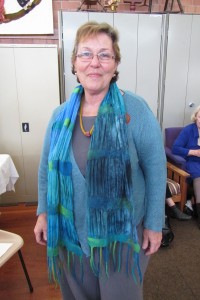 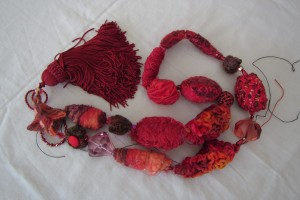 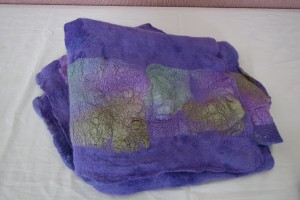 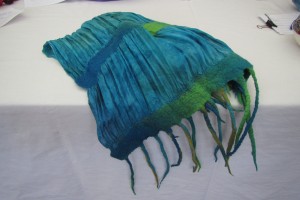 ·         Marion Finneran has been exploring the possibilities of recycling silk fabrics into nuno scarves. While pleased with the result, she noted that on one, where she had used an old silk scarf, the fabric had visibly deteriorated. In future she would be more careful when selecting this sort of fabric for a project.

·         Jill Jodrell and Pat Kendall had both made wearable items to suit the theme nights for the upcoming NZ Felt-makers Convergence in Auckland.  Jill created a stylish 3-cord necklace to wear herself and an asymmetrical evening bag for a friend which had been felted over muslin and incorporated some stitching.  Pat had used fine decorative prefelts on her nuno scarf for the Sky and Sea theme night, resulting in a delightfully delicate piece. 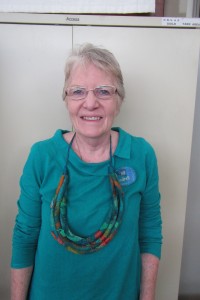 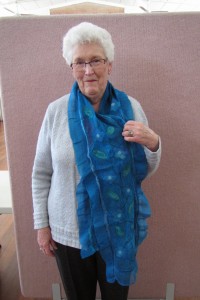 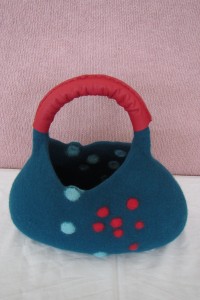 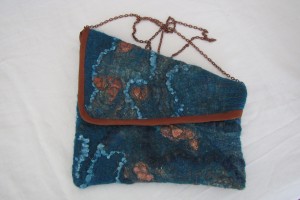 ·         Sue Eslick made another dotty bag in the style of Atsuko Sasaki whose workshop she attended a while back. Apart from the raised bumps, the challenge was to reduce the 15hrs of rubbing required in the original workshop to get the same extremely firm and flat felt. Her experiment succeeded by using the rubbing technique in conjunction with rolling, tossing and various tools – and took only 8hrs to achieve a very similar result.

·         Antoinette Boyd had meditation beads in progress and noted having small components to work on, made it one of those things you can do when away or with restricted time and space.

·         Katalin Dobos – This bag was originally a cat cocoon /cave that morphed into a bag once it was established the cat had declined to occupy it. 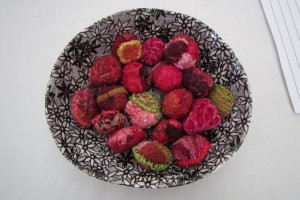 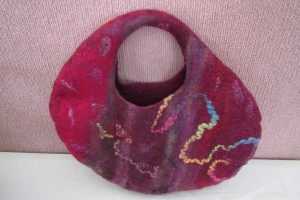 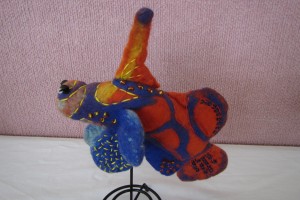 ·         Soosie showed us more items made using 3D resists illustrating that the technique can be used for more than cacti and unusual abstract shapes. Her Mandarin fish and Spotted Wrasse or ‘fish on a stick’ was an inspiration in using resist techniques in another direction.  She has also donated her ‘Cape to Cape’ scarflette created for the Scarf festival to the Xmas raffle. The elegant shaping of the cape was achieved by using a resist. The distribution of the beads was based on an 80:20 ratio representing the 80% of people living on the coast of Australia and 20% inland. The beads were counted exactly.

·         Lyn Blasgund’s small green and brown bag was testament to the importance of fulling… again… and again.

·         Sue Harrington made a cat cocoon for a friend. With wattle flowers still to be added, the result was not as stiff or as large as expected, despite a lot of hard work. She used 12 layers of 30 micron Corriedale each side of the resist, and felted every 2 layers. Her original shrinkage rate was based on a sample made with 8 layers each side. Using 12 layers altered the planned outcome. We don’t think the cat will mind, but there was a suggestion the structure had ‘foot warmer’ potential if the cat turns up its nose. 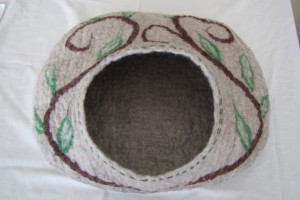 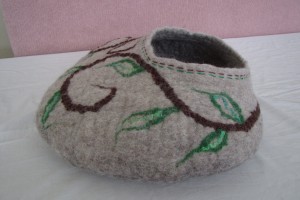 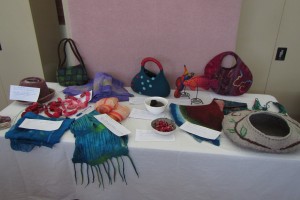 ·         Sara Quail showed her fulling boards made from a brickies smoothing tool and glass gems attached with Tarzan grip glue. Adhesion was made easier by the already roughened surface. She also showed the 10 metres of silk she had dyed for Fiona Duthie’s Joomchi felting and garment construction workshop she is doing at FibresWest . She had also been experimenting with dyeing wool roving using a variety of techniques, partly because 700g is needed for this workshop which seems a lot of wool for a wearable piece, even allowing a healthy %age for making samples.

·         The meeting closed with Sue wishing all the best to those participating in both FibresWest and the NZ Felt-makers Convergence.  We look forward to seeing the products of their labours in due course.

Due to Corona Virus containment strategies Feltwest has cancelled and/or postponed all of our activities until the end of June. We will revise this situation as soon as government restrictions will allow. Dismiss