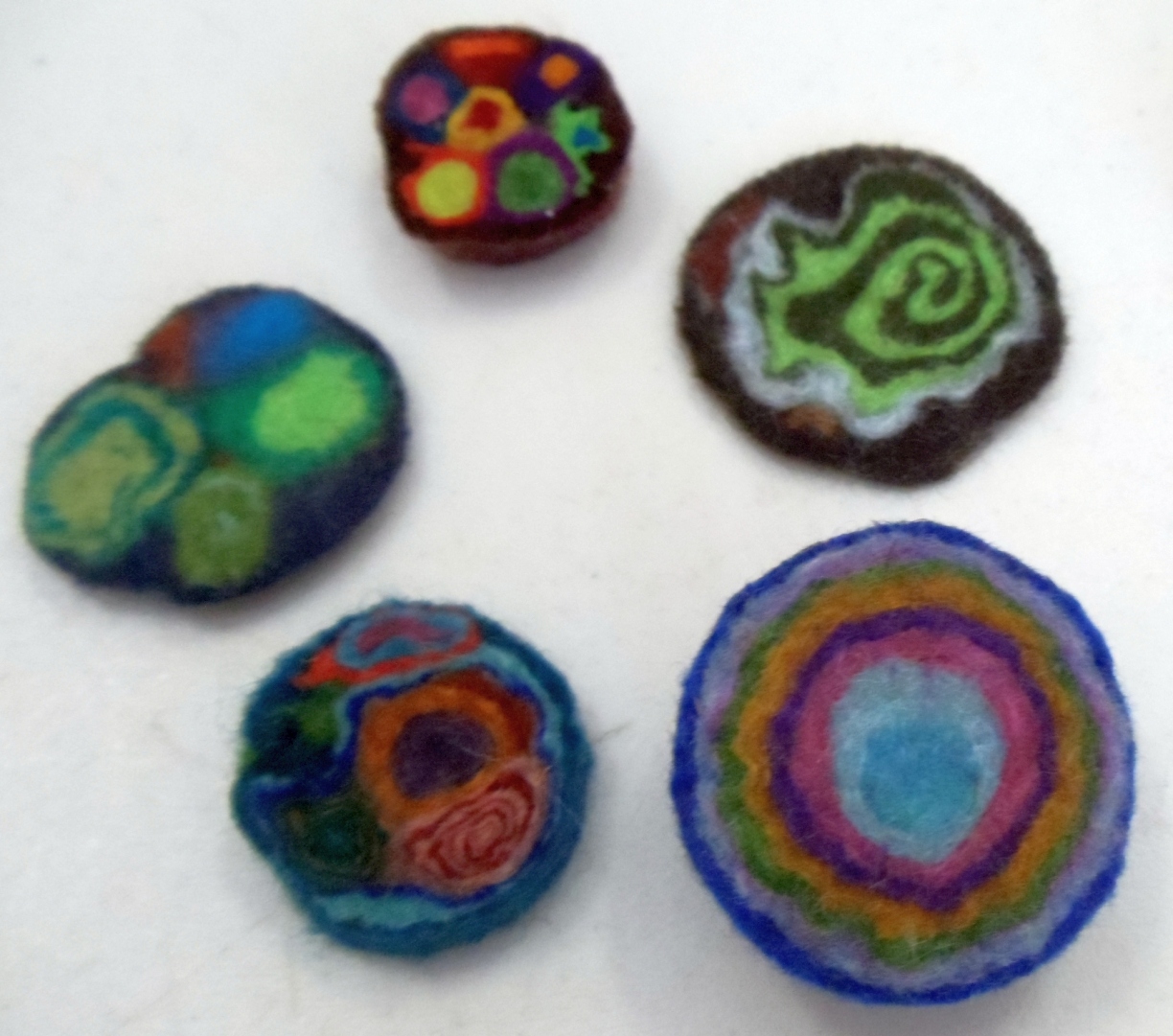 Saturday the 18th of February saw the first FeltWest meeting of 2018.  Attendance was higher than expected with about 40 people pouring in to catch the first day not only of the meeting, but of the new and (hopefully improved) format.  At ten thirty the group gathered for Sue Eslick’s excellent demonstration with it’s easy to follow instructions for the making of felted sushi rolls.  The end of the demo set the hall alive with activity.  Tables were shared which created a lively social atmosphere.  Lots of persuasion was needed to drag participants from the work for the lunch break with meeting notices and T and T. 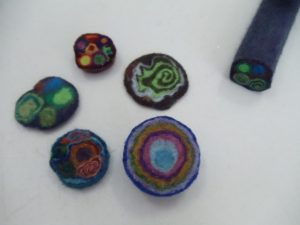 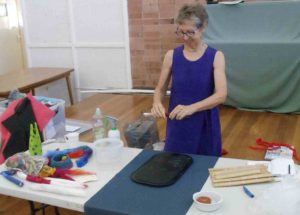 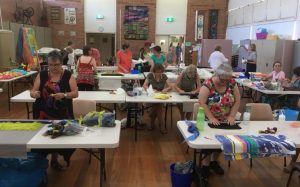 The news items from the meeting will be posted on the website, but special mention must be made of the opening of bookings for the Retreat at Muresk in early June.  We do need expressions of interest as soon as possible so the appropriate bookings can be made.  It’s a fairly complicated procedure; the booking that is, not the fabulous weekend, so do seriously consider coming along for a few days of unrestricted felting and a lot of fun.

Toss and Tell began with Sara Quail reporting on her dyeing workshop which was held in early February. 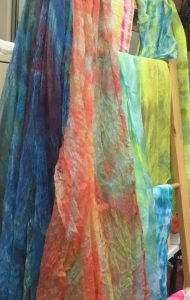 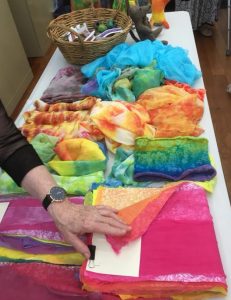 The enthusiasm of the attendees was attested by the colourful results – a myriad of beautiful colour combinations on lengths of silk and cotton, using fibre reactive dyes.  Congratulations must go to Peta whose many test pieces showed a great dedication to the process.  Her gorgeous samples a credit to herself and to her demonstrator.  Peta was obviously truly inspired.

Martien brought along superb examples of her boots and slippers along with an intriguing nuno scarf, quite long but made from just 90 cms of fabric.  Thanks to Martien also for bringing along her wares.  We are aware that it’s lots of work, but great to have supplies available, especially when there are new members. 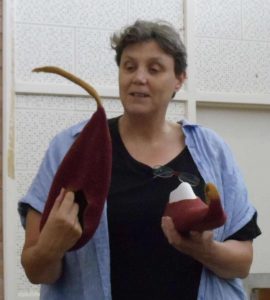 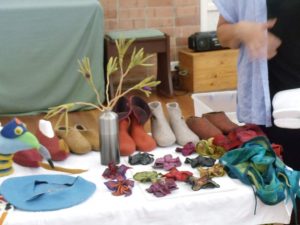 Marie showed some delightful and well- made sample pieces as well as a swathe of bay tree branches which she explained keep kitchen moths out of her pantry!  Lots of recipients of the branches will be trialling this way of keeping out the pesky insects at bay over the coming month.  Feedback please!

Jan Manning showed her very thoughtful and colourful renditions of Picasso and Magritte paintings in felt.  Hopefully we’ll see more of these in future. 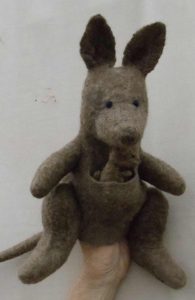 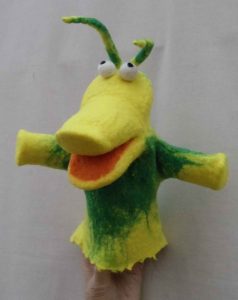 Jill Jodrell’s menagerie of hand puppets were a delight – from her realistic kangaroo to colourful wacky creations.

There’s a future workshop there! 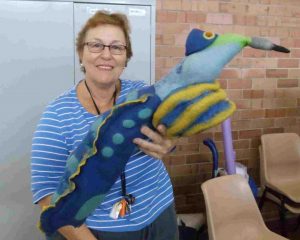 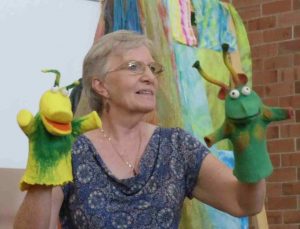 Marion Finneran also created a  large ‘critter’ which purposefully incorporated a multitude of techniques she acquired in an online workshop. 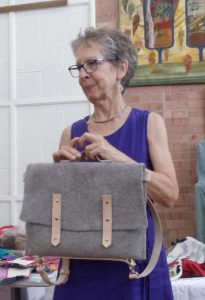 Sue Eslick modelled her intriguing beret as well as the messenger bag that will be made in the felt and leather workshop in April. 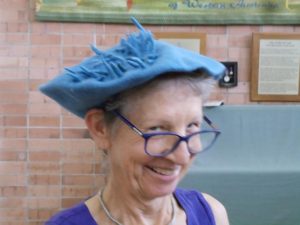 The afternoon was spent completing Sue’s sushi rolls with much whacking and beating (most enthusiastically by Liz Owens} as Sue explained that once a certain point is reached in the process maltreatment is necessary. 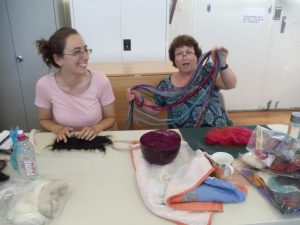 The new format was greeted with enthusiasm by all.  It seemed to give the group both inspiration and impetus.  No adverse comments were received but there were lots of suggestions for further improvement and that is great for any organisation. 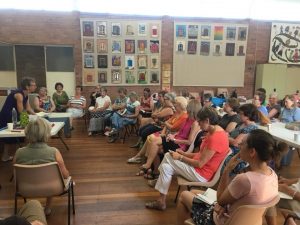 Kerry Bertucci and Marion Finneran took in items for showing at the Wagin Woolorama with their usual efficiency.  We wish Kerry and Sue Eslick along with Chris and Nancy all the best for the event which we will hope to hear all about at the March meeting.

Alison Gomes manfully conducted an afternoon beginners workshop under somewhat difficult circumstances since the studio was in use by another group.  Thanks to her for quietly making it work for the seven participants who seemed well pleased with the results. 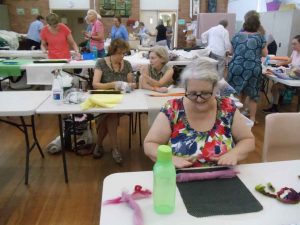 All in all, a good day.  Many thanks to those who came along and participated and especially to Sue E.   I for one am looking forward greatly to future meetings. 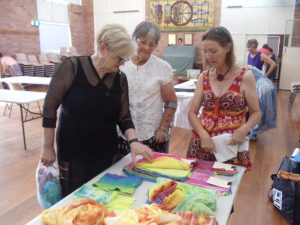